ConfessIt is a Roman Catholic examination of conscience app for web, Android, and iOS. It's designed to be simple and easy to use, and it can help you remember your sins when you go to confession. There's also a confession walkthrough that tells you exactly what the priest will say and how you should respond -- a great resource if you haven't been to confession in a while! The examination of conscience is based on fundamental Catholic church teachings, is easy to understand, and is relevant for modern Catholics.

New! For all devices

For Android phones and tablets

Over the last 8 years, I've added many features and improvements to the app when I have time to work on it. I'm often asked whether there's a version of ConfessIt available for iOS, and until recently I've never been able to say yes. But now, in 2020, I'm finally releasing ConfessIt as a progressive web app at https://confessit.app, with all of the core functionality of ConfessIt for Android. This new version runs on all platforms -- iOS, Android, and computers. 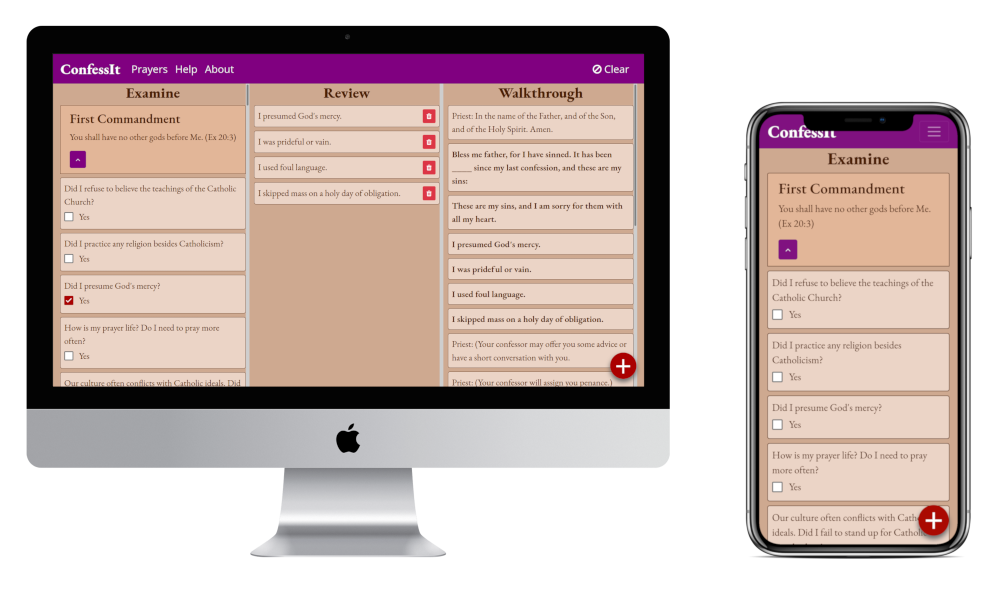 This is making me feel so much more confident in knowing what to expect and what to say during confession.
— Jessica

Great!!!! This app has been very helpful to me as a new convert to Catholicism.
— Roy

Used this, priest was in awe.
— Marc

I found this app to really help me in preparing for confession. It really does help in remembering what you might need to confess.
— Kendall

Is ConfessIt approved by the Catholic church?

While ConfessIt does not have formal approval from the Catholic church, it is based on Catholic teachings from the Catechism of the Catholic Church and the Revised Standard Version of the Holy Bible, Catholic Edition.

How much does the app cost?

The app is free, and I hope to keep it that way!

Is there a place where I can provide feedback?

Yes! I would love to hear your feedback at mike@mikekasberg.com.

Is there a version for iOS?

Yes! As of April, 2020, you can use https://confessit.app on your iOS device. You can even install it to your homescreen like a native app.

Will there be any new features?

Yes! Since the app was originally released, version 2 added a confession walkthrough to help you remember exactly what to say. Version 2.2 made the Android app available in Spanish. In version 3, I added even more features like saving and password protection. Since then, I've been focused on bringing the app to a wider range of devices via https://confessit.app.