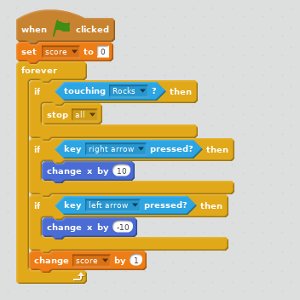 The Hour of Code is an annual event to encourage Computer Science education during Computer Science Education Week. I participated this year by volunteering at an elementary school, where I spent about an hour introducing the students to computer programming through Scratch. I think Scratch is a great way to introduce people (both young and old) to programming because it is simple enough that beginners can get started very quickly, but also powerful enough to create good-looking games (like this Flappy Bird Clone).

I designed my own lesson for the Hour of Code 2017. I wanted my lesson to be centered around designing a simple game. The game needed to be fun to play, but still exceptionally simple - simple enough that 5th grade students could program a more-or-less functional copy in roughly an hour. I designed an Asteroid Field Game.

Now, although the game linked above is pretty simple (roughly 60 lines of Scratch code), I needed to simplify it even more to ensure that:

To that end, I created an even more simple version of the same game. This one is only 20 lines of Scratch code, and some of those (such as the score) are optional. I felt that programming a game like this was within the reach of 5th grade students, and I planned the lesson in chunks so that we would finish something that resembles the Asteroid Field game, even if we didn’t finish completely.

Overall, the lesson was a huge success. The class loved it, and I think many of them came away from the lesson with a better understanding of what programming is than they had going in. Perhaps more importantly, I think that for many kids this opened a doorway to a new world. I hope that for at least a few students I sparked an interest in computer science that they will pursue for many years to come.

If you’re interested in seeing the lesson, you can check out the lesson plan and the slides. The Scratch game and source code, along with some of my other Scratch projects, can be found on my Scratch profile.