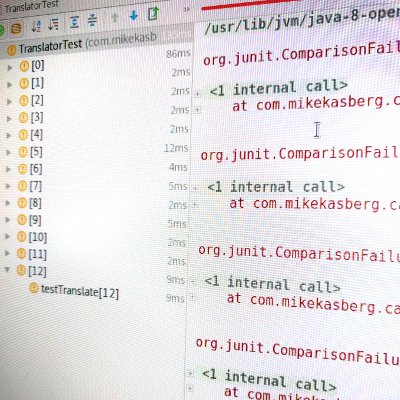 Why Are My Tests Failing?

Have you ever tried to diagnose a test failure and had no idea what’s broken? Maybe you were looking at something like this:

Or, equally as bad:

These are pretty bad failure messages. They have the bare minimum amount of information you might get from a failing test. They tell you something’s broken, and probably give you a line number or a stack trace, but that’s all. They don’t give you very much useful information. In the spirit of Google’s Testing on the Toilet, this is my own rant about one way you can make your tests better.

The problem is that if assertTrue() fails, no additional information is provided to the user. Let’s see if we can clean that up a little. A simple approach is to just add a failure message:

That makes our test failure message a little more useful:

But that’s tedious. Nobody wants to write a message for every assertion. Also, there will be a tendency for the message to become outdated as the code is updated. Can we do better?

Hamcrest is a framework that provides matchers for various data types with nice failure messages. You call assertThat(actual, matcher) and your object is compared to the Matcher. If the condition isn’t fulfilled, you get a useful, easy-to-read failure message.

Matchers are great because they know how to produce a useful message when a condition isn’t fulfilled. The best part about Hamcrest is that matchers are reusable, and it comes with a lot of them. If it doesn’t have a Matcher you need, it’s easy to write your own! And Hamcrest isn’t the only framework that can do this. Other frameworks, like AssertJ, work in a very similar way.

So far, we’ve looked at a few quick examples, but it’s not always so simple. Suppose you have some integration tests for an API that are running code like this:

If that test fails, you’ll get a message that looks something like this:

OK, that’s a little useful… At least you know the API returned a 422 when it was supposed to return a 200. If you were trying to debug this, would you want any more information? Personally, I’d want to see the response body. It would save me a lot of time, since without it I’ll have to debug through this test or call the API manually to see what went wrong.

But how to you make the response body show up when the test fails? Hamcrest (at least as we’ve used it so far, without custom Matchers) won’t help you here, since you’re already getting a reasonable message for the integer comparison. What we need is to add more info to the message. That’s easy enough:

That’s better. Now, we can see the body of the HTTP response in our failing test:

This message gives us much more information about what is wrong with the system we’re testing. It saves us time when we’re trying to debug a problem, and that can be incredibly valuable when it helps your team iterate quicker. If you find yourself doing things like this often, it might make sense to look for a library to help with it, or write your own matcher that can automatically parse the response body (or status code, headers, etc.) out of an HTTPResponse.

What we’ve talked about so far is only the tip of the iceberg. What kind of failure message is most useful when comparing large blobs of JSON? CSVs? Selenium pages? As you include more matchers in your codebase, patterns will begin to emerge. You’ll learn what information is most relevant for particular types of failures, and you’ll make that information quickly available. Over time, these patterns can help you transform your test suite into a really powerful test harness that matches perfectly with the unit you’re testing.

So what’s the point?

Tl;dr: Make sure your unit and integration tests print useful information when they fail. It will save you time in the long run.

That sounds like it’s really simple, but it’s easy to forget about it when you just want to write a quick test and move on to the next piece of code. TDD can help with this - if you watch a test fail before you watch it pass, you have a great opportunity to improve the failure message if it needs more info.

We can break all of this down into a few simple points: