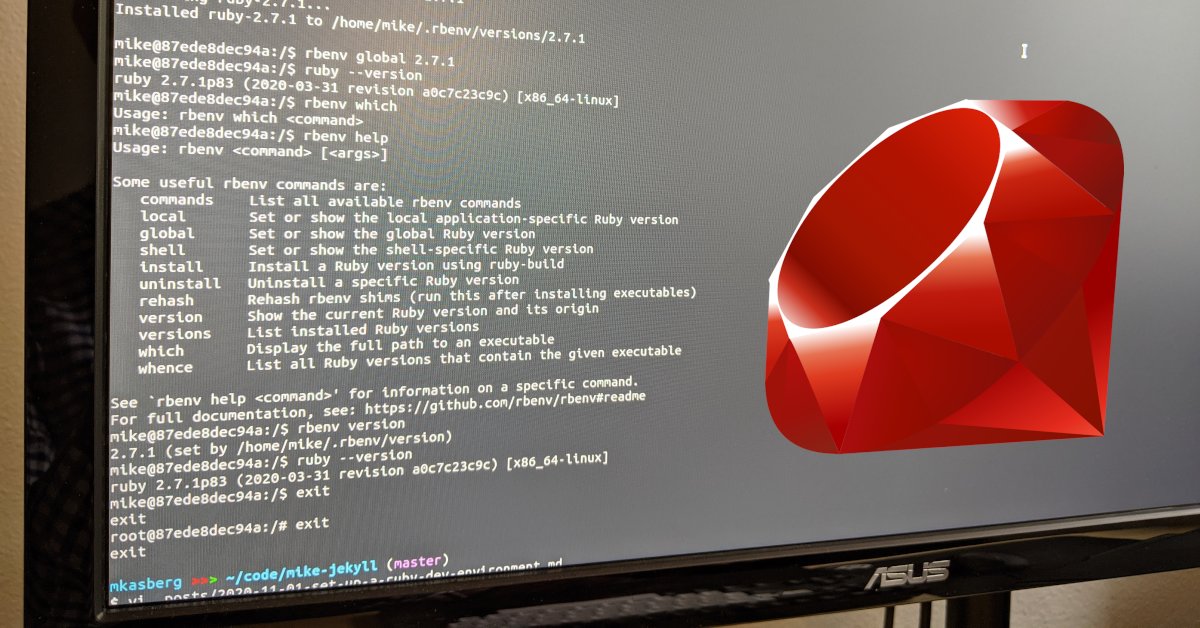 How To Set Up a Ruby Dev Environment on Ubuntu Linux

Setting up a development environment correctly might not seem like a big deal at first, but an incorrectly set-up environment can cause a lot of problems down the road if you’re not careful. In my experience, the internet’s full of solutions – both good and bad – for environment problems, but often does a poor job of explaining why a solution’s good or bad. And installing Ruby can be tricky if you’ve never done it before. So here’s my advice.

Let’s say you want to run a gem – for example, Jekyll. To run the gem, you’ll have to install Ruby and then install the gem. Rather than jumping straight to the best solution, I’m first going to look at what not to do so you can understand what problems this might cause. After seeing what not do to, we’ll look at a couple better solutions, and we’ll see the advantages and disadvantages of each. By the end, I’ll show you what I think is the best way to install Ruby so you can avoid environment headaches.

Want to go straight to the instructions for the proper way (in my opinion) to install Ruby without reading about what not to do?

What Not To Do

When you’re a beginner with Ruby or Linux (we’ve all been there) and all you want to do is run a gem, sudo appears to solve all your problems. You might come across advice like this:

While this might appear to solve everything, it can also create a host of new problems. For example, maybe you’ll need to install some gems with Bundler a few days later. If you try using sudo to install gems with Bundler, you’ll probably see a warning like this one:

Bundler warns you that this isn’t the best way to do things - root will be the owner of all the files bundler installs, and from that point on you’ll have to continue using sudo to get gem updates until you fix your file permissions.

But beyond this, installing gems with sudo can actually be dangerous - particularly since gems can execute scripts when they install. For example, see killergem. Even if you didn’t install this malicious gem directly, if one of the gems you try to install even depends on a malicious or compromised gem, it could be bad news. Let’s look at a better solution…

So if the above steps are problematic, what can we do that’s safer? Maybe you just want to run a quick script or gem and you don’t care about managing specific versions of Ruby. You want a simple solution that works and doesn’t have permissions problems.

Done. We’ve installed the jekyll gem without using sudo. In this case, for simplicity, we’re relying on our OS to provide an easy-to-user Ruby installer. This is fine, but it does mean we’re stuck with the version of Ruby that our OS provides. Which is fine for simple needs (like running a few simple scripts or gems), but might not be ideal if, for example, you’re developing a Ruby application that requires a specific version and want to upgrade your version of Ruby independently of your OS. If you’re regularly programming in Ruby, it will be important for you to install the version of Ruby required by your application, and possibly install multiple versions of Ruby for multiple applications or during upgrades.

The Best Solution: How to Install Ruby with rbenv

The best solution for installing Ruby and managing your installation is a Ruby version manager. Using a version manager allows you to have multiple versions of Ruby installed at once and select the one you want to use. It also decouples your Ruby installation from your OS package manager, and provides a solution for doing everything without sudo. There are a few options for version managers. RVM is reputable and has a good following, but in my humble opinion rbenv is simpler and easier to use. To install rbenv, you can find the most up-to-date official instructions here, but they can be a little confusing, and they’ll boil down to something like this:

It is confusing to have Ruby installed by both apt-get and rbenv on the same system. If you've already installed Ruby with apt-get, you should remove it before continuing. You can do so with sudo apt-get purge ruby.

One thing that’s great about rbenv is it does not tie you in to a specific ruby version. You can set up local (per-directory) and shell (per-terminal) versions if you want. Simply rbenv install x.x.x and then use the correct commands (see the docs) to pick your version. In addition to this, by default, rbenv will allow you to install gems to a location that doesn’t require sudo (with a normal gem install command), which should prevent a lot of headaches.