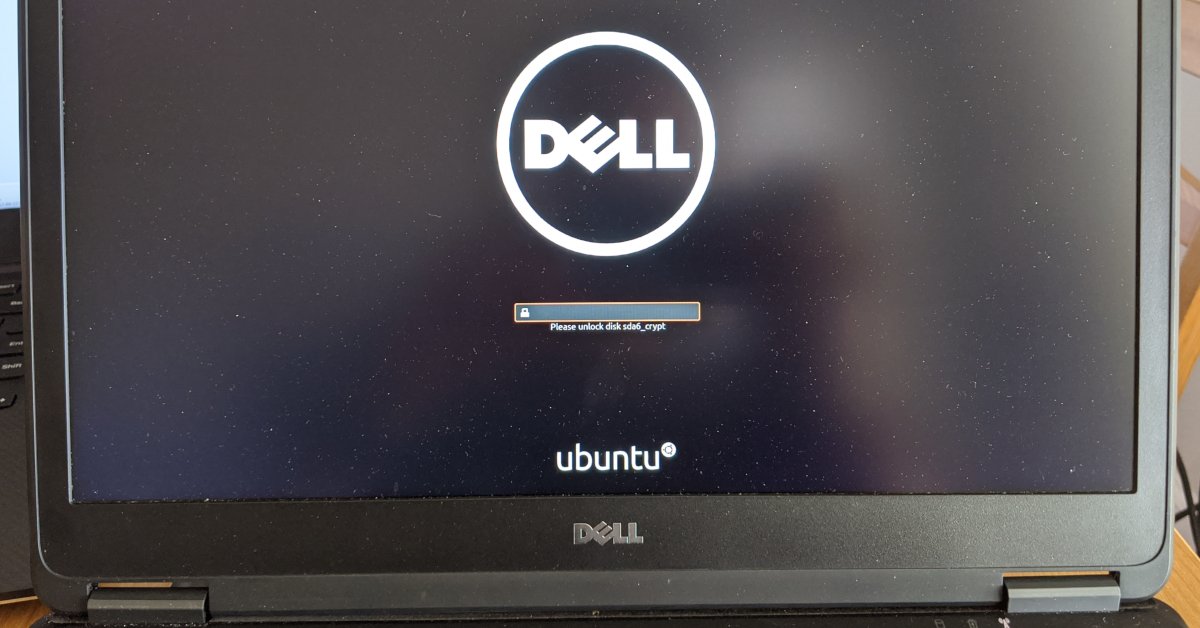 When you run the Ubuntu installer, there’s an option to dual-boot Ubuntu with an existing Windows installation. There’s also an option to encrypt your Ubuntu installation, but only if you erase everything and install ubuntu. There’s no automatic way to install Ubuntu alongside Windows 10 with encryption. And while there are plenty of tutorials for dual-booting Ubuntu and Windows, many of them are outdated – often referencing an MBR partition table – and almost none of them seem to address encrypting your Ubuntu partition.

Dual-booting with encrypted storage should not be this hard in 2020.

–Me, while figuring out how to do this.

In reality, once you figure it out, it’s not that hard. The tricky thing is that this isn’t well-documented anywhere! So I’m hoping to fix that with this tutorial blog post. Honestly, if you know enough about Ubuntu to set up a dual-boot with Windows, it’s only a little bit harder to do it with encryption. I prepared this tutorial on a Dell Latitude e7450, and I fine-tuned it when I tested it on my Dell Precision 5510. So it should work with almost no modification on most Dell systems, and with only minor modifications (particularly around BIOS setup) on most other types of computers.

To write this guide, I compiled information from several sources. Here are some of the most useful references I found:

I’ve also received responses to this post from some people who wrote their own notes:

It is worth noting that this method doesn’t encrypt /boot. While there are valid reasons for encrypting /boot, the graphical installer does not encrypt it when you do a graphical install with LUKS. As such, I’m matching that precedent, and keeping the simplicity of an unencrypted /boot partition. Thus, the guide I’ve compiled below is just about the simplest way to have a LUKS encryption with dual-boot.

Why encryption is important

I began using encrypted storage on all my personal computers 5 or 6 years ago after noticing that all the companies I’d worked for required it, and had good reason to. Laptops get lost and stolen all the time. They’re high-value items that are small and easy to carry. And when a thief gets your laptop, there’s tons of valuable information on it that they can use or sell. Even if you use a password to login, it’s easy for an attacker to gain access to your data if your disk isn’t encrypted – for example, by using a live USB stick. And once they have that data, they might get access to online accounts, bank statements, emails, and tons of other data. For me, an encrypted hard disk isn’t optional anymore – its a necessity.

So what are we going to do? This tutorial will help you set up a system to dual-boot Ubuntu 20.04 and Windows 10. (I haven’t personally tested it, but it should work with most other modern versions (~16.04+) of Ubuntu or Windows, and I’ve received reports that it works with Ubuntu 22.04 LTS.) The system will use a GPT hard disk with UEFI (your BIOS must support UEFI). The Ubuntu partition will be encrypted with LUKS.1 The Windows partition can optionally be encrypted with BitLocker. I’m going to keep the Ubuntu installation as close to a “default” installation as possible – no fancy tricks like a separate /home partition, but it should be somewhat easy to add that yourself if you really want to.

I’m going to start with a blank hard disk, installing both Windows 10 and Ubuntu from scratch. If you already have Windows installed and you want to keep it, you should be able to shrink your Windows partition instead of erasing your hard disk at the end of phase 1, and skip phase 2 (installing Windows) entirely. Beware that when you rejoin us in phase 3, your partition numbers might be different from ours, so you should run sudo sgdisk --print /dev/sdx to make sure you understand your partition table.

To give you a broad overview of where we’re headed, here’s what we’re going to do:

Of course, as with any new OS installation, you should back up any important data before proceeding. The instructions below will erase all the data on your hard disk. Proceed at your own risk; I’m not responsible for any damage or data loss.

My computer uses /dev/sda as the primary disk. Yours might be different, and you should figure out what it is. For example, you might have /dev/sdb or /dev/nvme0n1. One way to figure out what yours is called is to run lsblk and look at the disk size. You're looking for the disk (like /dev/sda or /dev/nvme0n1), not the partition (like /dev/sda1 or /dev/nvme0n1p1). If you'd like, you can enter your device name below and this document will update to replace /dev/sda with your device name (/dev/sdx) so it's easier for you to read.

Since we’re installing both Windows 10 and Ubuntu from scratch, we’ll need a USB stick for each. If you don’t already have a computer running Ubuntu or Windows, making the installation media will be a little harder – but there are tutorials for that and I’ll let you figure it out on your own.

Great! We’ve got our USB sticks ready to go! One final thing before we get started – we need to make sure our BIOS is set up correctly. In particular, we want to make sure we’re using UEFI to boot our OS.2

Now that our BIOS is configured for UEFI, we’re going to set up our hard disk.

For this tutorial, your BIOS must support UEFI!

Most modern computers support this, but if yours doesn't this tutorial won't work for you. You might consider these alternatives:

OK, phase 1’s complete. We have our installation media ready to go and the computer’s BIOS and hard drive is set up correctly. Next, we’ll install Windows.

In this phase, we’re going to install Windows. Note that when we do this, we’re going to leave some unallocated space to install Linux later. This is a good approach because the Windows installer will mess with our partitions a little bit, and its easier to let it do so before finalizing our Linux partitions. 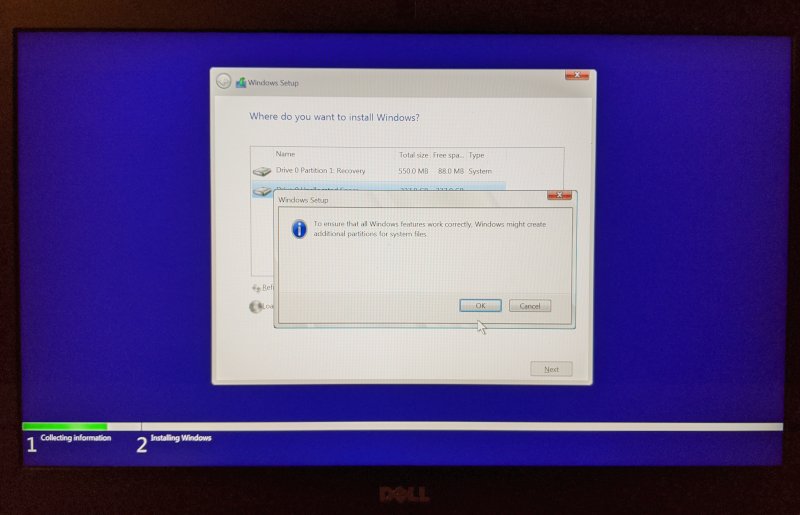 At this point, you can start using Windows. But I’d avoid doing too much setup or personalization yet so you don’t have to do it again if something goes wrong below. If you want to double check your partitions, this is what you’ll be left with after installing Windows and enabling BitLocker:

Phase 3: Partition the drive for Ubuntu

This is the trickiest phase since this is where we need to manually set up our encrypted disks for Ubuntu. We’re going to make it work very similar to the way the Ubuntu installer would set things up if you encrypted your whole disk.

Throughout this section, I’m going to be referencing sgdisk commands. You could use gdisk if you’re comfortable with it and want an interactive interface, or you could use GParted or Disks (in Gnome) if you prefer. sgdisk commands are just easier to reference in a tutorial.

If you want, you can run sudo sgdisk --print /dev/sdx to examine the partition table before moving on. You’ll see multiple partitions created by the Windows installer, and should see some empty space where we’re about to install Ubuntu. (If your disk isn’t /dev/sdx, see here.)

Now, all our partitions are prepared. Don’t stop here! Continue to the next phase without exiting the Ubuntu live environment.

Done! Congratulations, you’ve created a dual-boot system with Ubuntu 20.04 and Windows 10 with all your data encrypted! Now that both installations are finished, you can reboot your computer.

By default, your computer will boot into grub, which can boot Ubuntu. Although Windows is listed in grub, booting Windows from grub with BitLocker enabled won’t initially work because the system’s TPM will detect a change in the boot sequence. The easiest way to avoid this problem is to boot Windows directly from your computer’s BIOS boot menu - usually accessible by pressing F12 on startup. If you prefer to boot into Windows from grub, I’ve been told you can make this work by booting into Windows from grub, entering the encryption key when prompted, suspending BitLocker, and rebooting into Windows via grub again.

As a reference, here’s the final state of my hard drive (with 2 logical volumes on the rootfs partition for / and swap):

I hope you found this guide useful, and I hope full-disk encryption with Ubuntu becomes more popular and better-supported as a result!

This article has become quite popular in the two years since it’s been released! I’ve made some (minor) changes over that time to make it easier to use, and I’m going to start documenting these changes here for clarity.