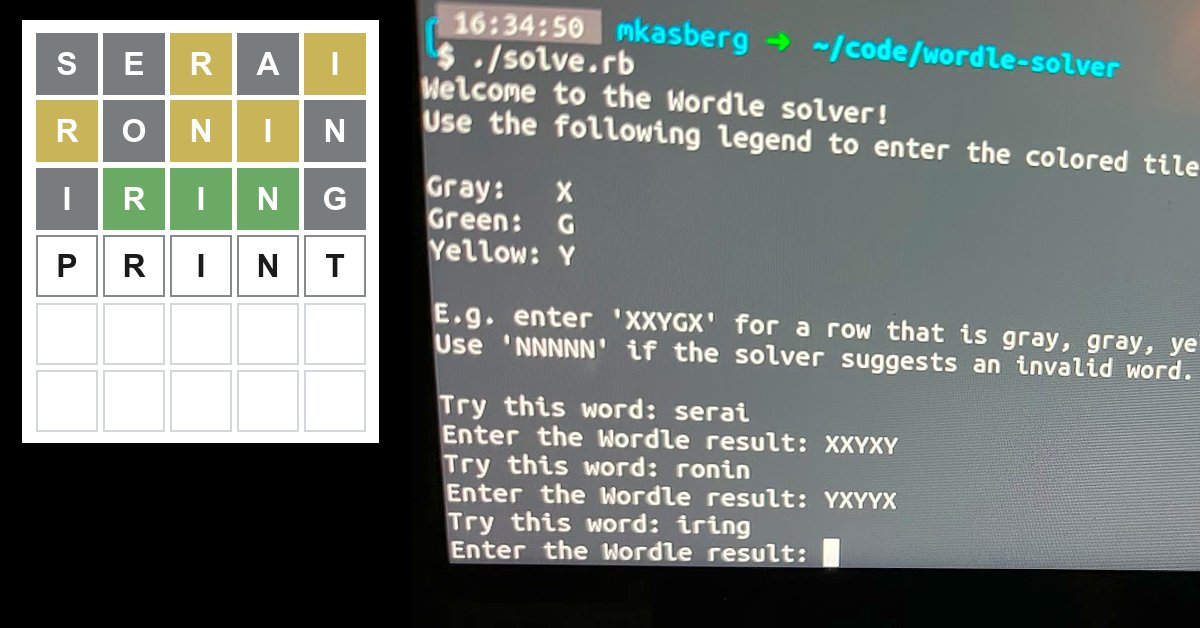 Wordle is one of the latest crazes to hit Twitter. You might have noticed it – it’s the thing everyone’s posting with the yellow and green boxes. Wordle is a game where you have to guess the word of the day. Each time you guess, it’ll tell you if each letter appears at the spot you guessed, somewhere else in the word, or nowhere in the word. You win by guessing the correct word in 6 guesses or less.

This blog post contains spoilers! It dissects the stragegy of Wordle, links to code that could help you cheat, and might ruin your fun. You've been warned!

Wordle is a fun problem to solve with your brain, but it’s also a fun problem to solve with a computer! It’s actually a great “intro to cryptography” type of problem, which is part of the reason I thought of trying to solve it with a computer in the first place. You see, Wordle is susceptible to a concept known in cryptography as frequency analysis. Some letters in the English language appear more frequently than others, and we can use that information to make better guesses in Wordle.

How do we turn this into a computer program?

Well, we start with a word list. I grabbed one from this GitHub repository. Once I had the word list, I wrote a quick script to filter it so that it only contained 5-letter words. (All words used in Wordle must be 5 letters.) That’s a pretty good starting point, but we can actually do better than that. I updated my script so that it would pre-sort the word list based on the combined frequency of the letters the word contains. This way, when we make our guesses, we can prioritize words that contain the most common letters.

Armed with this sorted word list, I wrote a script to solve Wordle. The script is pretty simple – about 100 lines of code! It always uses the same word to start, and this is actually the best strategy to use even if you’re solving a Wordle puzzle yourself with your brain. Spoiler alert! That word is serai – it contains the 5 most common letters in English. From there, using our word list, the script will eliminate words that don’t match, prioritize words with letters that do match but are in the wrong spot (yellow), and recommend another guess. The script tells you what to guess, you tell it the results, and it loops until you win (or lose).

I think there are probably a few small optimizations that could be made to the way it guesses words, but as it stands now I think I’ve already gotten 80% of the value with 20% of the work, and that’s good enough for me. I’ve only tested this with a handful of words so far, but it’s been able to solve each one. There are probably a few edge cases that will break something, but I can fix those as they pop up. Is this cheating? Yes, probably, but it was fun to build and that’s really the point. Don’t use it to beat your friends if you don’t want an unfair advantage. Want to see my code? It’s on GitHub.